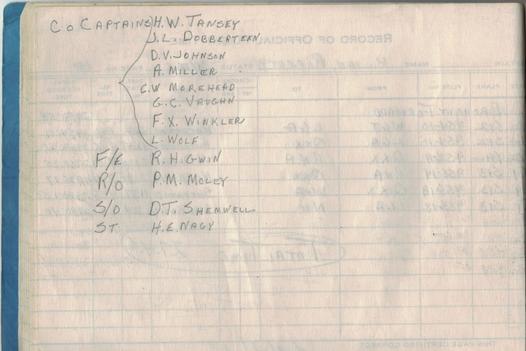 Helen frequently wrote home to New Jersey during her flying years, often using the gorgeous TWA postcards of the 1940’s.  One postcard, post-marked in Albuquerque, NM in 1943, reads:

"Dear Joe and Papa: had a flight here for a change.  Weather is beautiful.  Hope to see you all within the week.  How is Spotty?  At present I have a severe cold and earache so may not get out of K.C. for a few days.  Will be home when I get in." 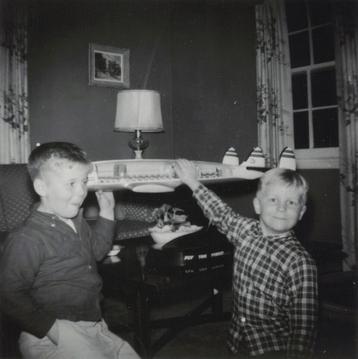 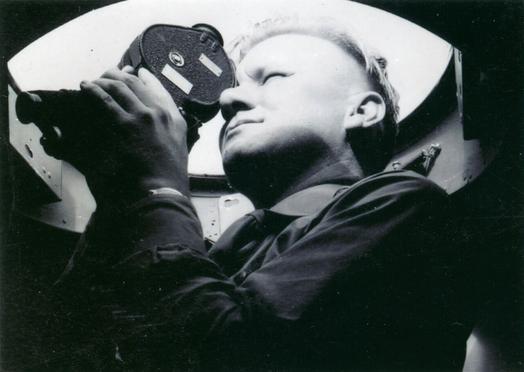 Legend has it that on this particular trip, Bob Sr. and Helen were stuck in Gander for several days due to the weather, and Bob Sr. had a bottle of Scotch with him.  The legend goes that Bob Sr. and Helen swore they would finish the bottle of Scotch if yet another airplane overflew Gander due to weather, thus stranding them.  They emptied the bottle and they married on May 5, 1946.

Bob Sr. would continue plying the North Atlantic, but Helen resigned from TWA, as married Air Hostesses were not permitted in 1946.  After they were married, Bob Sr. and Helen travelled the world and lived in Washington, DC and Rome, before settling in Livingston, New Jersey, near Bob Sr.’s base at LaGuardia Airport. 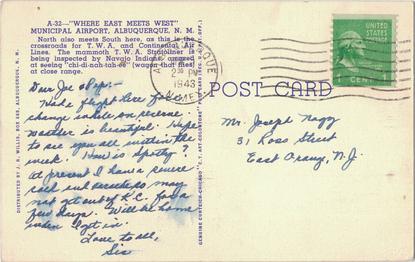 After losing his TWA job, Bob Sr. bounced around to Northwest and Braniff, flying the Pacific and Vietnam War charters, as those airlines had not yet converted to Doppler navigation. In 1968, Bob returned to TWA supporting TWA’s management assistance contracts with Trans-Mediterranean Airways in Beirut, and Nigeria Airways in Lagos.

Like Bob Sr., Ken also did not take losing “his” passes well.  In 1970, Ken took a job with Western Airlines, becoming family seniority number three.  Ken’s first years with Western coincided with Bob Sr.’s last years in the airline business.  When Bob Sr. was with Trans-Mediterranean Airways in Beirut, he most often flew portions of their around the world cargo service.  He would fly as an inactive crew member from Beirut to Tokyo, then work the Tokyo-Anchorage leg, where he used Ken’s passes to fly on Western from Anchorage to Los Angeles, arriving early Saturday mornings.  He would be home until the next afternoon when he used his TWA retiree pass on the nonstop to London, where he would connect to Scandinavian Airlines to go to Stockholm.  He would stay there for a day or so and work the Trans-Mediterranean leg from Stockholm to Anchorage, where he used Ken’s passes to come home for the weekend.  And repeat.

Bob Sr. and Helen were married for over 56 years.  In their retirement years, they lived in Bend, OR, and were avid readers of TARPA Topics.  In one letter to the editor in 1996, Bob Sr. recalled watching TWA through its ups and downs, and a recent trip on TWA in which he and Helen saw “first-hand the spirit which was so strong among all of the employees to have the best air line in the business,” and he was hopeful that the spirit they saw would turn the tables.  By this time, Bob Sr. wrote, air travel had become so hectic that they preferred driving trips in the Northwest.

Family seniority number four is Bob.  After marrying Nancy, he decided he also wanted his passes back.  Bob went to work for American Airlines starting in April, 1978, first in reservations, and then in other jobs at LAX.  Before long, Bob transitioned to the Marketing Automation department, where he trained and assisted travel agencies who had decided to install SABRE in order to book airline space and tickets.

In 1982, Bob’s work with American took he and Nancy to Tulsa, Oklahoma, where they started the third generation, their sons Sean and Brian.  As Bob worked for American, the third generation flew TWA only one time: in 1983, Nancy and Sean took TWA flight 205, a Boeing 727, from Tulsa to Oklahoma City, and then Oklahoma City to Los Angeles.  We know this now because like Bob Sr., Bob kept logbooks.  Although Bob, Nancy, Sean and Brian were never flight crew members, Bob maintained logbooks for each of them, with details of all the flights they each took during Bob’s 30-year career with American and beyond.  The logbooks are living records of Bob and Nancy having accomplished their goal of showing Sean and Brian the world while continuing the legacies of by Bob Sr. and Helen.

Naturally, Brian decided that he, too, wanted his passes back.  In 2007, Brian became family seniority number five when he went to work for American Airlines Federal Credit Union.  As of now, family seniority number six is to be determined.  Brian’s son, Jameson, and Sean’s daughter, Elise will know their family history in the golden age of air travel, and they already have their own logbooks.  Although they can’t fly TWA, they are off to a good start.  For Jameson’s part, he was born on Bob Sr.’s 98th birthday, and he can already identify TWA aircraft in pictures.  For Elise’s part, her first flight was on a former TWA aircraft, an American MD-80 with registration number N979TW.

What Helen and Bob Sr. started lives on in their two sons’ long airline careers, their family’s passion for travel, their grandson’s airline career, and now their great grandchildren, whom they never met.  We can think of no better testament to Helen, Bob Sr., the airline business, and TWA.

By February of 1946, when TWA started service from the US to Europe, Helen became part of the first international hostess group, and served as the hostess on one of TWA’s first L-049 Constellation flights from Europe to the US.  Helen saved a clipping from a local newspaper that reported on her journey:

Miss Helen Nagy, daughter of Mrs. Helen Bojtos, of 945 Cross Avenue, is getting an opportunity for world travel as an air hostess for Trans-continental and Western Airlines.

A graduate nurse, Miss Nagy took part in flights made recently by T.W.A. which broke the Los Angeles to New York and the Gander Lake, Newfoundland to Shannon, Eire, records.

The flight overseas gave the Elizabeth girl a chance to see several countries, as the plane stopped in a number of important centers before returning to the United States.  Customs of the East became familiar to her, even the one which requires the patrons of select hotels of Cairo to have breakfast in bed whether or not they desire it.

Miss Nagy was the first T.W.A. air hostess to fly overseas since the war ended, her mother said.

The Los Angeles to New York hop took seven hours and twenty-seven minutes, while the flight to Eire, aboard a T.W.A. Constellation with Jack Frye, airlines president at the controls, consumed six hours and thirty-six minutes. 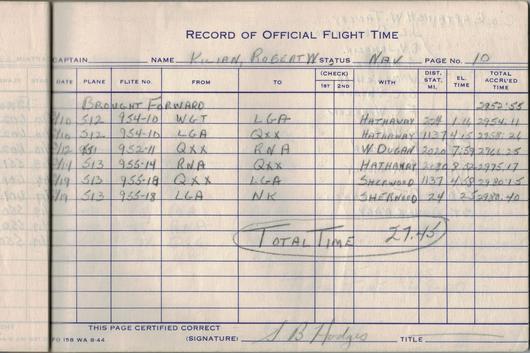 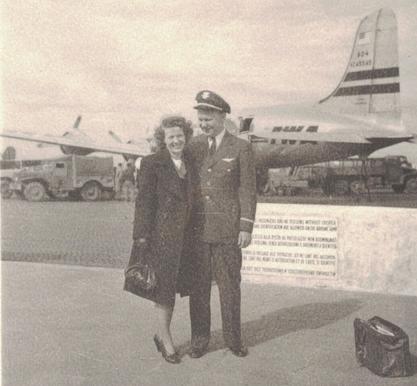 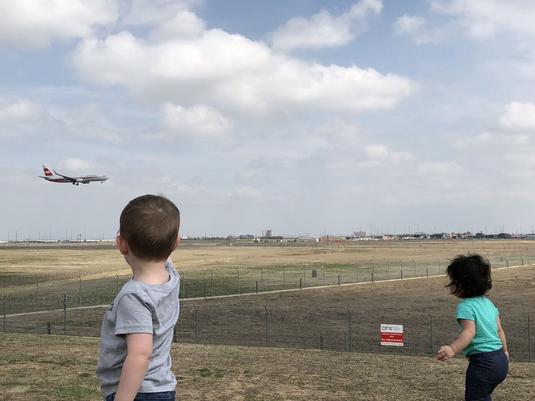 The story of the Kilian Airline Family begins at TWA, and Helen Elizabeth Nagy has family seniority number one.  Helen was born in 1919, in Newark, New Jersey, the daughter of Hungarian immigrants.  Her father was a “hatter,” her mother was a cook for wealthy New York City families, and she had a brother named Joe.  From humble beginnings, Helen graduated from Battin High School and went on to graduate from Newark City Hospital as a registered nurse.  After graduating, her supervisor mentioned to her that there were new businesses that required registered nurses as hostesses.  They were called airlines. 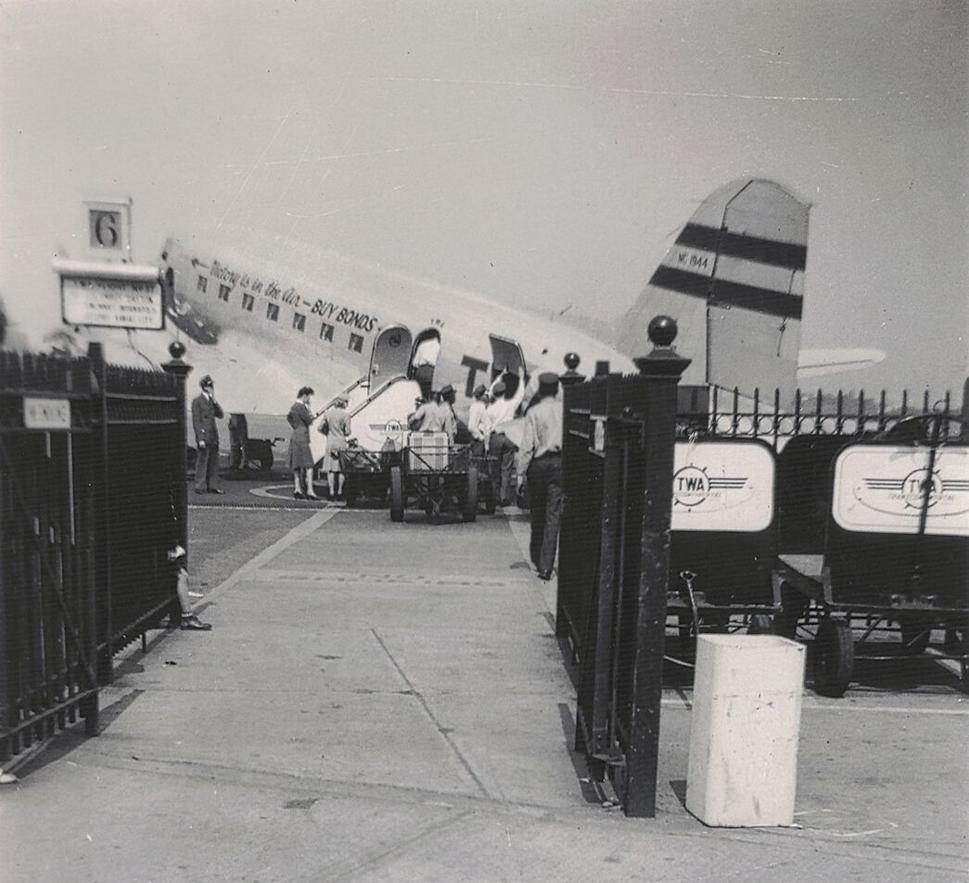 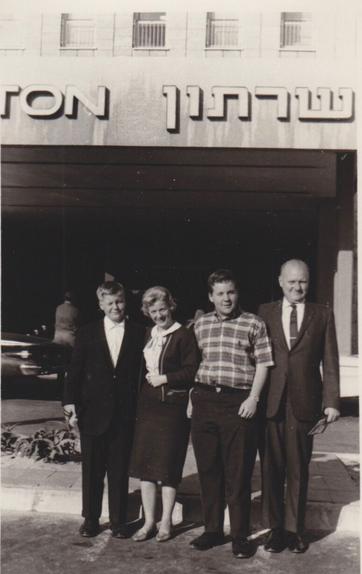 Soon after, Bob Sr., Helen, and Bob welcomed Bob’s baby brother, Kenneth Gordon Kilian.  Post airline career and with two kids, Helen coined the phrase “we are an airline family,” a phrase that we still use today.

Bob and Ken took full advantage of being airline kids in the 1950’s and 60’s.  For his part, Ken liked to pull the pictures of airplanes out of the family photos and claim them by marking his initials, “KK.”  Bob had the unique hobby of creating fictional airlines and writing out their timetables in spiral notebooks.  Both of them enjoyed writing letters to airlines all over the world: Bob and Ken would offer sketches of new paint jobs, to which the airlines would respond by letter with compliments and enclosing various collectibles.

In one of Bob’s notebooks, he sketched the aircraft he flew on during a very memorable flight in April 1959, the family’s first cross country trip to California.  As Bob recalled years later, this trip was his one chance to fly on a Lockheed L-1649A Starliner Constellation, the legendary pinnacle of piston-powered airliners.  The flight was a redeye, departing New York’s Idlewild Airport for Los Angeles.  Watching the engines’ blue flames out the starboard window was unforgettable for nine-year old Bob.  However, as he glanced out the window around dawn, he noticed one propeller feathered, and they soon landed in Denver.  Even the mighty 1649A could not cross the Rocky Mountains on three engines.  At that time, TWA had one flight per day from Denver to Los Angeles: an all coach, and much older, L-049 Constellation.  Bob and Ken hated it!

Soon after this trip, the family moved to the Los Angeles area where Bob Sr. worked a few more years for TWA.  However, in 1964, with the certification of Doppler Navigation, TWA phased out its Navigators, and Bob Sr. was out of a job.  Bob Sr. did not take lightly to losing his “passes,” and in 1964 the family took full advantage, emptying the retirement account to visit England, France, Ireland, Italy, Germany, Switzerland, Greece, Israel, and Luxembourg. 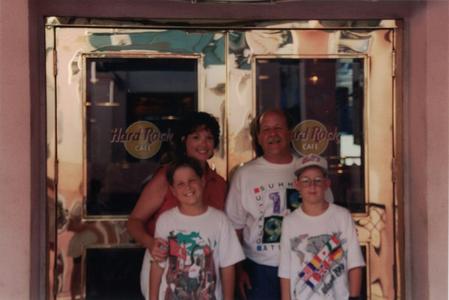 Helen applied first to American Airlines which, the story goes, turned her down because her lower front teeth were not straight enough to meet American’s standards.  Thankfully, TWA did not care about her teeth and she was hired as an Air Hostess in February of 1942.  At this time, TWA had yet to begin international service, so Helen was based out of Chicago and Kansas City, flying Douglas DC-2’s, DC-3’s and Boeing 307 Stratoliners on domestic routes.  One such route was TWA flight no. 37, the “Spirit of St. Louis,” with service from Boston to New York and on to Philadelphia, Pittsburgh, Columbus, Dayton, Cincinnati, Indianapolis, St. Louis, and Kansas City, daily.  One day, at Pittsburgh’s Allegheny County Airport, Helen snapped a photo of the aircraft operating flight no. 37, a DC-3 with registration number NC1944.  Today, this particular DC-3 resides at the Flight Path Learning Center & Museum at LAX. 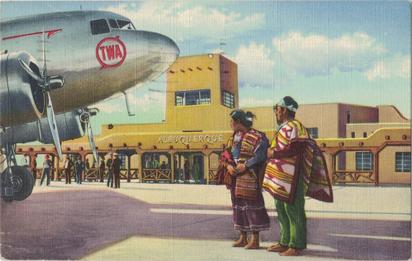 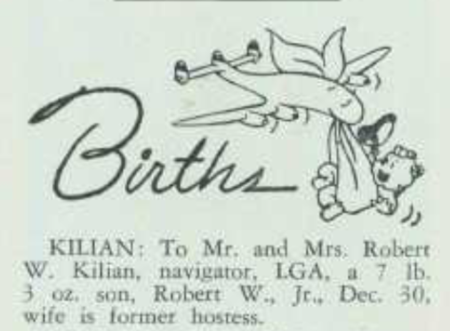 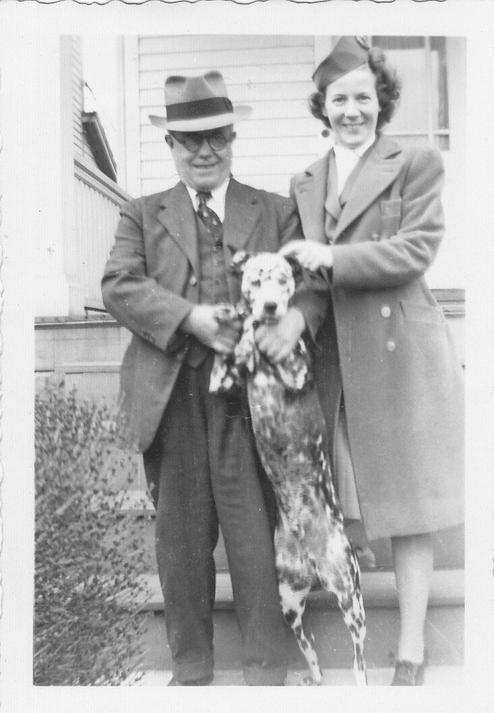 By this time, Robert Wesley Kilian, Sr., family seniority number two, was a few years into his TWA career.  Bob Sr. was born in 1918, in Milwaukee, Wisconsin.  His family soon moved to Atlanta, Georgia, where his father worked as a refrigerating engineer and machinery salesman for Vilter Manufacturing Co.

After graduating from Emory University and a stint in the US Navy’s flight school, Bob Sr. joined TWA as a Navigator with a hire date of December 14, 1942.  He was then seconded to the Air Transport Command, a unit of the US Air Force that used airline crews to deliver aircraft for the war effort during World War II.  Bob Sr.’s navigation skills were needed for the overwater segment from Brazil to West Africa, as the Douglas C-54’s he operated did not have the range to fly the North Atlantic.  TWA began trans-Atlantic service in February, 1946, shortly after the end of World War II.  From the beginning, Bob served as a Navigator on trans-Atlantic flights aboard TWA Constellations.

In these days, Bob Sr. wrote in his logbook the names of the other crew members on his trips.  On March 10, 1946, Bob Sr.’s fourth international trip for TWA, he left Washington, DC on flight 954 for New York, and Gander, Newfoundland.  On March 12, he left Gander on flight 952 for Shannon, Ireland.  On March 14, the return trip left Shannon back to Gander.  However, flight 955 did not leave Gander for New York and Washington, DC until March 19, five days later.  The trip totaled 27 hours and 45 minutes of flying time and took 9 days to complete.  As Bob Sr. had written on the back page of his log book, the Air Hostess for this trip was “H.E. Nagy,” who was serving on her third international trip for TWA. 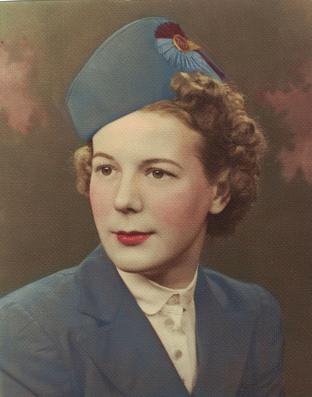