Ed was born in Santa Monica on August 31, 1920, to Madeleine and Edward Betts, Sr., who lived in Calipatria/Brawley at the time. The family soon moved to Santa Monica, where Ed grew up and attended local schools, including SamoHi and Santa Monica City College. While in his senior year in the Engineering School at UC Berkeley, on the Friday before Pearl Harbor was bombed, Ed enlisted in the Army Air Corps and trained as a bomber pilot. Captain Betts became the commander of a B-25 in the 57th Bomb Wing serving the campaign in North Africa and later on Corsica. He flew 74 combat missions and was decorated with two Distinguished Flying Crosses and a Purple Heart. He was honorably discharged in 1945 with the rank of major.

In August 1945, Ed was hired by TWA and began flying as co-pilot on DC-3s based in San Francisco. In 1946 he flew with a new hostess, Donna Breckenridge from Plattsburg, Missouri, who was also based in San Francisco. Donna and Ed were married on December 7, 1946. Ed was a regular volunteer in service to others; in ALPA, the American Legion, the Masonic Lodge and the Boy Scouts. He was active in the TWA Seniors Club and served a term as President of the Southern California Chapter.

After Ed was transferred by TWA to the Los Angeles base in 1955, the family moved to a house on Asilomar in Pacific Palisades. Two years later they moved to the Marquez Knolls neighborhood, and in 1960 they bought their current home on Las Lomas. All three, of their children attended Marquez Elementary, Paul Revere Junior High, and Palisades High. In 1970, Ed was TWA Flight Deck Man of the Year and in 1976 he received the Award of Excellence.

Ed continued to fly for TWA until his retirement in 1980 after a 35-year career. At that time he was flying as 747 Captain on international overseas flights. Donna would often travel with him to exotic destinations. In retirement, Ed became involved with early TWA history and published many books and articles as an authority on the subject. He and Donna were very active in the TWA Active Retired Pilot's Association and the 57th Bomb Wing activities and reunions. They traveled extensively during these years, visiting Europe, Asia, Africa and the South Pacific. Ed had a daily routine of long, brisk walks throughout the village in Pacific Palisades. He was a regular sight to many people on his route, and he could be seen daily resting by the fountain at the Village Green.

Special thanks to Janet Betts Dean and the Betts Family for allowing us to share this collection. 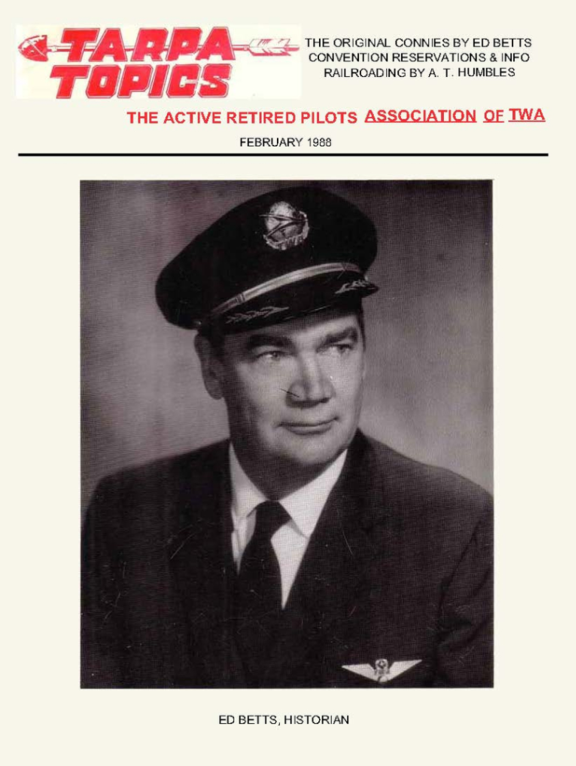