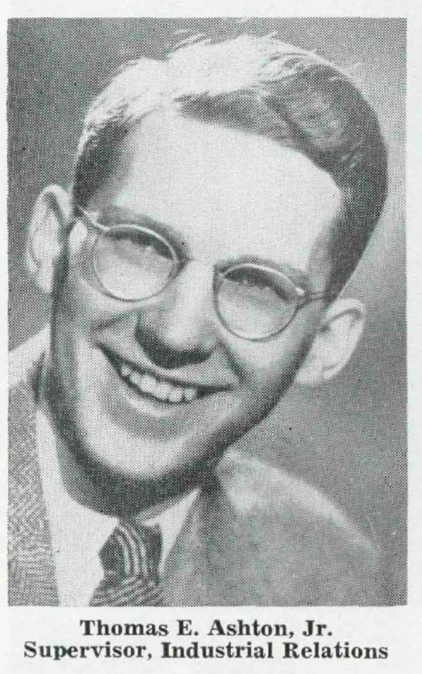 Thomas Edward Ashton, Jr.
Thomas Ashton lost his life on June 30, 1956 in the mid-air collision of a TWA Super Constellation L-1049, “Star of the Seine”, and a United DC-7 over the Grand Canyon. Mr. Ashton joined TWA in July, 1944, as a junior passenger agent at Albuquerque. In 1945 he was promoted to personnel representative in Kansas City and to training instructor in 1949. He became suggestion plan investigator in 1950, later was named job analyst in wage and salary, and was promoted to suggestion plan manager in March, 1953. In June, 1956, Mr. Ashton was named supervisor of industrial relations, Western region, and was to be based in Los Angeles. At the time of his death, Mr. Ashton was 34 years old and was survived by his wife, Barbara; a son, Thomas E., III; a daughter, Jennifer; his parents; and a brother and sister.

The Ashton Family generously donated some items to our Museum, to include some recently-discovered glass slides. These slides are 50-60 years old and were utilized by Mr. Ashton to train other TWA employees. This is a very unique and rare collection, which provides some insight as to the training methods employed by TWA in the 1940’s and 1950’s, utilizing what little technology existed at the time.

In July of 2014, the National Park Service established a National Historic Landmark on the South Rim of the Grand Canyon in recognition of the impact that this disaster had on efforts to radically improve the chronically neglected, and the then and now, underfunded national air traffic control system. Mr. Ashton’s son, Thomas Ashton III, attended the ceremonies dedicating this National Historic Landmark and visited the mass gravesite where all but three of the passengers and crew of TWA Flight 2 were buried. This was the first time that Thomas had visited his father’s grave or the Grand Canyon. Thomas was kind enough to share the following reflections regarding his father’s death:

“I was three days past my 10th birthday on June 30, 1956, and although 59 years have now passed, I am still deeply affected by my father’s death. While I recognize that there are many people who might find information about this disaster deeply troubling and therefore inappropriate for inclusion in the TWA Museum, information about my father's work at TWA would be incomplete without the perspective of the circumstances surrounding his death.” (see below)

Jennifer Ashton-Lilo was kind enough to share her reflections regarding her father’s death:

“I know that you (the Museum) have spent hours preparing and scanning the slides and I am so appreciative of that and of the insight that it has given me into my Dad's work and life. As a child (I was not yet 7, but rather 6 at the time of the crash), we are unaware of many of the ways our parents impact the lives of others, and I feel great pride in knowing that my Dad was a positive and productive member of the TWA team. The accident had a huge impact on our family and lives.”

The document link and photos that appear below were provided by courtesy of Thomas Ashton III and are described by him as follows:

National Historic Landmark Nomination (click on the link to download the document)– Provides the factual predicate upon which the National Historic Landmark designation was based. This document was largely prepared through the efforts of Ian Hough, Archaeologist, Grand Canyon National Park, P.O. Box 129 Grand Canyon, AZ, 86023. This publicly-available redacted version excludes detailed location information that the National Park Service deemed necessary, appropriately, to withhold to prevent scavengers from removing remaining artifacts from the crash sites of both planes.

National Historic Landmark Plaque – Photo of the plaque installed by the National Park Service at the Desert View interpretive site on the South Rim of the Grand Canyon.

TWA Star of the Seine - A pre-delivery photo of the Star of the Seine from the extensive Lost Flights archive of the Grand Canyon disaster: http://www.lostflights.com/Grand-Canyon-Aviation/63056-Trans-World/4906723_95VsW3/304500793_b4nRgBV

The Archives/Manuscript Collections of the National Park Service at the Grand Canyon contains additional information about the disaster in the “TWA-United airlines 1956 Accident” files.